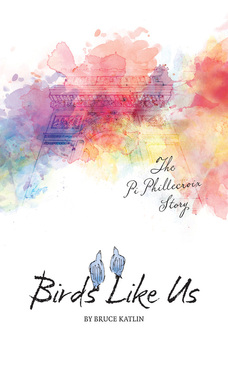 A proud and revered Parisian pigeon family is stunned to learn that their only child cannot fly.

​Parents Paul and Piette Phillecroix are respected the world over for their daring and flying excellence. Their only daughter Pi, born with a congenital anomaly, is only able to walk. She faces herculean obstacles and challenges in trying to define her life as the offspring of a legendary heritage.

At a time when young birds frolic with friends, Pi confines herself to a small corner of the family nest atop the Arc de Triomphe, hiding her disability in an effort to escape endless torment from the neighborhood’s bullying teenage bird population.

When Paul Phillecroix becomes deathly ill, Pi, unbeknownst to her parents, decides to begin an arduous journey walking from Paris to England in an attempt to find the only doctor who may be able to save her father’s life.

On her first night alone, two sadistic starlings string her up in a tall sycamore tree, dangling her upside down and threatening to drop her. Saved by a benevolent bird, she then fends off sharp-toothed rats. Arriving at a tributary of the Siene River, she hitches a ride with Pierre the Giant Sea Fish, a mythical legend in the collective minds of all bird youth.

Pierre swims Pi up river to the English Channel where she encounters a young gull named Louise. Creative and tenacious, Louise constructs a contraption made up of discarded beach trash with the purpose of ‘pulling’ Pi through the air to England. Crashing, Louise breaks both her wings--and urges Pi to continue on without her. Pi protests but Louise insists.

Further west, Pi comes upon a magical landscape where rainbow colors explode under her feet. She approaches the entrance to a cave and inside meets a group of ragtag dwellers consisting of Quick Jac, a red-bellied woodpecker; Darkhana, a small Turkish Chaffinch; Gritty Grimy Gramps, a cantankerous Palawan Peacock; and Señor Lafargue, a Cuban refugee. At first they take her hostage, then come to respect and aid her in her journey.

After leaving her new friends, Pi walks for days on end until she meets a horse named Big Fellow, who shares his own story of persecution and being separated from his family. He carries her atop his head to Cherbourg at the tip of Normandy. Once there, Pi stares across the Channel, wondering how she’ll cross it. Falling into a deep sleep, the sand beneath her begins to dissolve and the rising water carries her out to sea.

Étienne, Pierre the Great Fish’s estranged brother, is taking his daily swim and comes across Pi, who has been floating aimlessly in the Channel for eight hours. He carries her across to the south coast of England, landing on the Isle of Wight.

She finally finds Dr. Allbewell. A medic by training and an old war pal of Paul’s, the now recluse hasn’t flown in years due to severe anxiety and spends his days nested in a tree hollow. Even after acknowledging his reverence for Paul Phillecroix, he’s too paralyzed to fly. Having travelled so far and believing her father’s fate is in their hands, Pi does not accept “no” for an answer.

She convinces Dr. Allbewell to fly to Paris and give it his best shot. As Pi watches him unsteadily take flight, her initial exuberance for the mission’s success begins to fade. She immediately tries to figure out how to get back to the French shoreline—and her parents.

Walking at a feverish pace, stopping only for bread and water, she arrives in Paris eight days later. Utterly exhausted, she trudges towards her family’s nest atop the Arc de Triomphe.

Once there, she finds her father, barely breathing, and her mother, desperate and without hope. Trying every healing skill in his repertoire, Dr. Allbewell cannot save his old friend from the inevitable. Pi refuses to let her father die, and out of anger and sadness, flaps her wings so hard they cause Paul Phillecroix to rise to his feet, health miraculously restored!

Flocks throughout Paris receive the unbelievable news that Pi has returned from her heroic, arduous journey of 725 miles by foot--and by strength of will restored her legendary father’s health. In celebration, thousands of birds arrive from all over the world to meet their newest hero, showering admiration on the family with flapping wings and harmonic songs of jubilation.

That night, after the triumphant ceremony, Paul Phillecroix passes peacefully in his sleep.

The Phillecroix lineage and tradition of flying excellence remains intact: Fingal, a roguish handsome seagull cousin to Louise, courts Pi for six months-- until she agrees to marry him and they conceive a child of their own. Pi forges an identity that’s truly one-of-a-kind: the international bird community is inspired by a non-flyer, who faces her fears, overcomes adversity and challenges seemingly insurmountable obstacles. The esteemed Phillecroix heritage seems assured of a long and glorious future. Or is it?
© Bruce Katlin 2020 All Rights Reserved | Privacy - Terms of Use
CONTACT
Proudly powered by Weebly